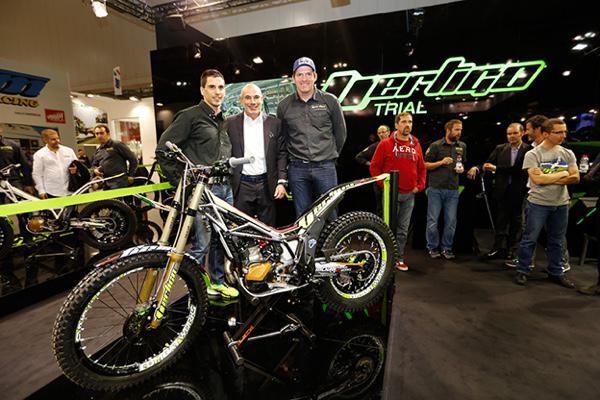 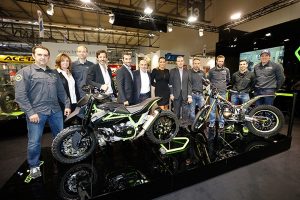 Almost twelve months to the day since Vertigo Motors unveiled its first ever model, earlier today the Spanish company has once again used the international stage of the EICMA motorcycle exhibition in Milan, Italy to lift the covers on several new projects in front of the World’s media during its official press call.

Once again it was the familiar and well-known face of Vertigo’s ex multi FIM Trial World Champion brand ambassador Dougie Lampkin who had the honour of leading the unveiling ceremony. Lampkin stood proudly alongside his own still dirty Scottish Six Days Trial winning Vertigo Combat as he made a short speech that outlined the success the company and team has achieved during its first year before moving on to new and topical matters.

Lampkin used the occasion to welcome newly signed factory rider Jeroni Fajardo to the Vertigo family (click here to read more about VERTIGO + FAJARDO JOIN FORCES) before he then handed over to Vertigo engineer manager Francesc Romani who explained more about the technical aspects of each bike as the covers were lifted on the new models one by one.

The models unveiled and introduced included three versions of the Vertigo Combat – Camo + Ice Hell + RR – the latter of these representing the brand’s flagship offering that incorporates a titanium frame as Vertigo continues it’s plan to innovate and set new standards within the Trial market.

This line up was complimented by the arrival of the new Vertigo Vandal model in two different versions. Both Vandal models use the same revolutionary two-stroke fuel injected engine as the Combat, but overall the S version follows a more traditional Trial format whilst the LR version has been designed as a long ride option.

In addition to its Trial focused projects Vertigo also presented their URSUS concept ‘urban-off-road’ prototype scooter that reflects the company’s strong non-tarmac roots and focus. Aside from their two wheel powered products Vertigo’s sister brand Crossbow proudly displayed its range of Trial cycles, frames and associated components to reinforce the collective and forward thinking collaboration between the two companies.

Commenting on today’s unveilings Vertigo Motors Sales Manager – Xavi Vilalta confirmed. “This is another very important moment for Vertigo, to be able to introduce so many new and exciting projects just one year after we made our debut here in Milan shows just how far the brand has come in such a short space of time and how serious it is about continuing to set new standards within this sector now and in the future.”

Xavi concluded by saying. “Over the coming days we look forward to sharing these with the global network partners we have in place already, any new potential distributors and of course the public who we hope will enjoy what we have to show them on the Vertigo stand here at EICMA.”

EICMA takes place at Fiera Milano, SS. 33 del Sempione 28, 20017 Rho, Milan. Press and trade visitors are welcome from Tuesday 17th November with prior accreditation. The exhibition is then open to the public from Thursday 19th November to Sunday 22nd November inclusive.

Images by kind permission of Future7Media.

Hi-res rights free images for editorial use only available on request.