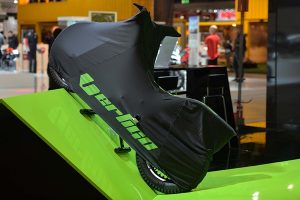 Vertigo Motors will use the opportunity of the famous EICMA motorcycle exhibition in Milan, Italy to be held 19th to 22nd November 2015, to unveil a series of new models just a year after the Spanish manufacturer first broke cover with its applauded Combat Trial model.

The Barcelona based company has been busy over the last twelve months with the continued development of its initial Combat model whilst competing and proving the revolutionary fuel injected two-stroke machine at the highest level. Factory riders James Dabill and Francesc Moret have both recorded some strong results in the 2015 FIM Trial World Championship, with Dabill also going on to win the British Championship to give the brand its first-ever national title. Moret’s end to the season was equally impressive as he netted the runners up spot in the European series.

However the most important and significant victory for Vertigo to date was achieved by brand ambassador Dougie Lampkin who captured the win at the grueling Scottish Six Days Trial back in May to confirm the reliability and performance of the then prototype machine at its first attempt at this much revered event.

Based on this sporting success Vertigo Motors will use EICMA to display the 2016 Combat production model that was recently launched to selected distributors and media, but is yet to be viewed by the wider audience. In addition to revealing the updated Combat model, the exhibition in Milan will also give the Spanish company the opportunity to unveil a series of other new and exciting projects.

These will all be presented to the media at 12.00hrs on 17th November 2015 during Vertigo Motor’s official press call.

EICMA takes place at Fiera Milano, SS. 33 del Sempione 28, 20017 Rho, Milan. Press and trade visitors are welcome from Tuesday 17th November with prior accreditation. The exhibition is then open to the public from Thursday 19th November to Sunday 22nd November inclusive.