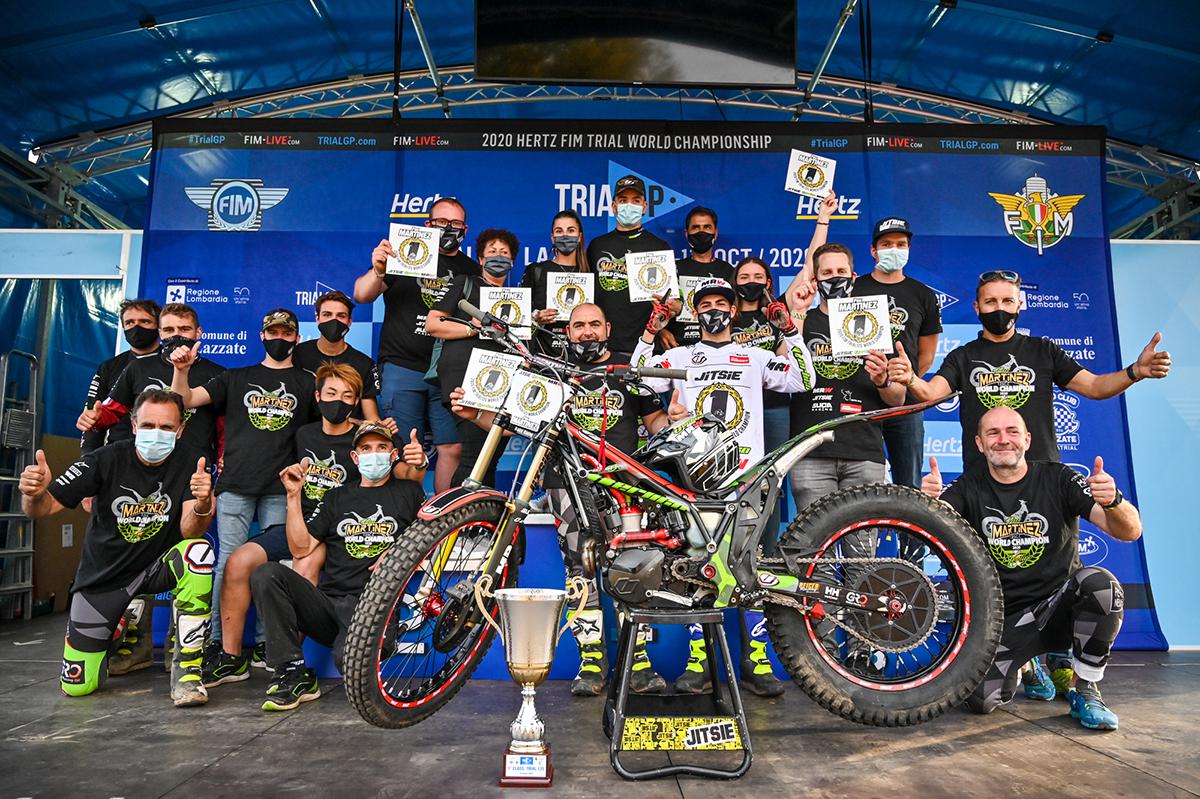 Last TrialGP of the 2020 season held in Italy over the weekend will be written in gold letters in the Vertigo record book as one of the most special ones of its history, as in the same weekend, the brand celebrated its first World Title thanks to Pau Martínez while placing Busto and Dignan inside the Championship Top 3 to score the best ever results for the Spanish manufacturer in the World Championship.

With the aim to keep his 3rd position in the Championship standings, Jaime Busto kicked off the Italian event with an outstanding 3rd place in the opening day. The Spaniard held a race-long battle for 2nd but in the end, a five on section 11, dropped him down to the third step of the box. On Sunday punctuations got closer and Busto had to settle for 7th, gaps between riders were so little that he was only 2 marks away from third. In the general standings he finishes 3rd in a phenomenal season that has witnessed the duo Vertigo-Busto confirm as one of the strongest teams in the paddock having proved their competitiveness in all kind of soils and weather conditions with a total of four podiums.

In Trial2 Hugo Dufrese posted his best result of the season on day 2 with a sensational 5th place. The rookie bounced back from a tough Saturday in which he struggled to show his true potential, but on Sunday he impressed with an amazing display of his unique technique, he fought against more experienced riders and was able to keep up with the pace throughout the entire trial to put a great end to the 2020 campaign and by the way, prove he has a bright future ahead.

Lorenzo Gandola, who was racing on home soil this weekend, ended his 2020 World Championship season on a high with a 7th place on Sunday and a 10th in the General Standings. The Italian has been amongst the Trial2 heavy hitters throughout the series and only some details in several races have prevented him from getting a podium this year.

The 2020 campaign has put Vertigo right to the spotlight of the Trial125 class. A total of three riders have recorded podium finishes throughout the calendar staring from Pau Martínez himself. The newly crowned World Champion has been dominant all year long with five victories, two second places and a 4th in Italy day 2. Ben Dignan completed this historic season for Vertigo with a 3rd place in the Championship, which he celebrated on the second step of the box on Sunday. The previous day he rounded out the Top 5. Pau Dinarés posted a 7th and 12th.

This has been the most successful season in the World Championship for Vertigo, representing a huge boost of motivation for the Spanish manufacturer in terms of continuing to work with its riders to fight for even more ambitious goals in the coming years.