After several weeks without X-Trial World Championship activity the series came back to action for the last round of 2019. Andorra saw again Jorge Casales within the event’s roster after making his previous two appearances in Budapest and Barcelona, the first two rounds of the calendar.

Competition for Casales started with Heat 1, joining Fujinami and Petrella. He got the second best score of his group, in which he was able to get used to the technical indoor obstacles and build some confidence towards round 2, as his 10 marks allowed him to make it to round 2 after finishing with the 6th best score. Once in this second stage of the event he managed to overcome every section of the lap, with a really solid ride and showing all the competitiveness of the brand new Vertical R. This consistency brought him to the runners-up final in 4th place.

Casales went in a thrilling face-to-face with Jeroni Fajardo for the 3rd step of the podium. He started with a five on section 1, but didn’t let that affect his riding and penalized only 1 mark on the next one. Section 3, a really hard one that saw every rider leaving a 5, meant he was arriving 2 marks under Fajardo to the closing section. Casales made it through with only 1 mark, Fajardo with 2, which left the first with 12 and the second with 11.

A memorable race to close the indoor season, showing his capacity and his talent to become a regular rider of the series and a strong contender for the top spots. With that positives coming from the event, it is now time to continue preparing the outdoors, which will begin by the end of May in Italy. 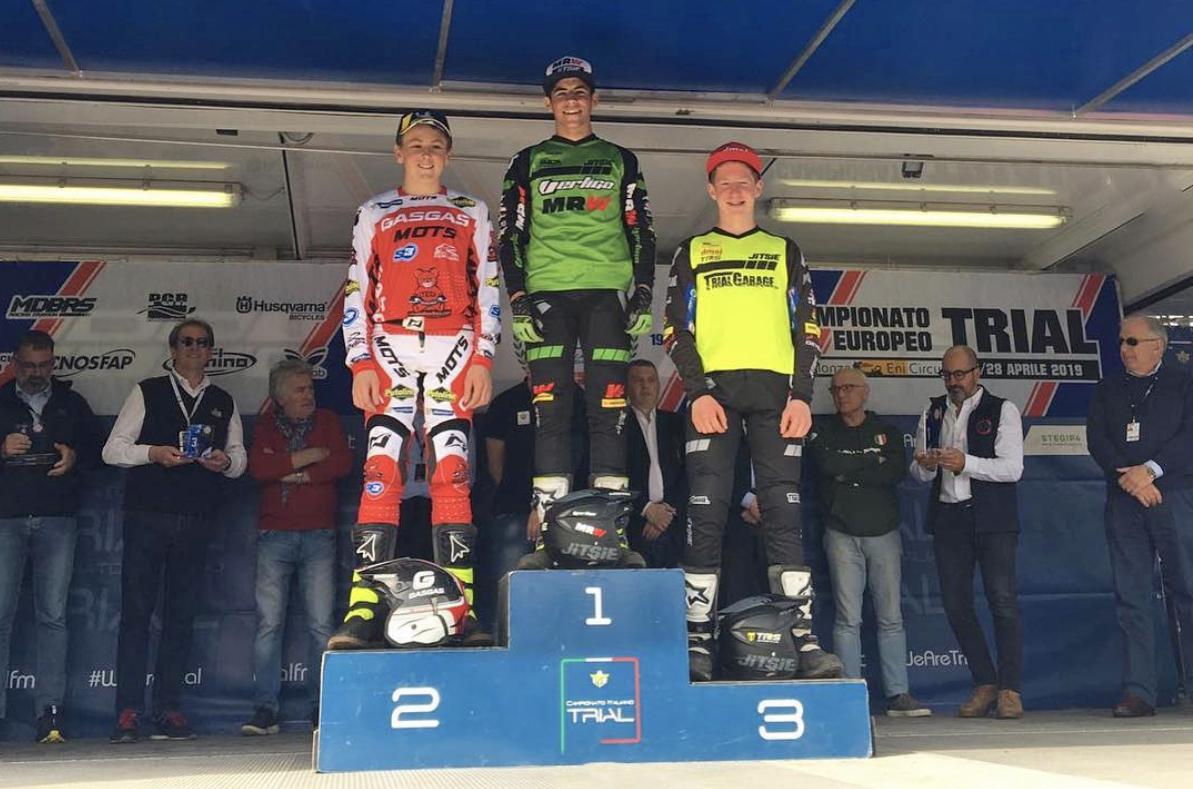 Pau Martínez keeps collecting success after success. Just one week after wrapping up a great victory in the opening round of the European Championship in Pietramurata, Martínez and his Vertical R 125c.c. stepped again on the top box in Monza, second round of the series. This time the victory was harder to earn because of the pressure coming from Britain’s Jack Dance, who remained only one mark down by the end of lap 1.

Second lap didn’t start off well for Martínez. He fived the opening section and was dropped to second place, leaving no room for more errors if he wanted to keep his victory chances alive. He quickly recovered from that bad start by only dabbing one more time and cleaning all the remaining sections. This impressive performance was enough to get back to the first place, where he would finish to earn his second victory in a row and confirm his supremacy in the general standings, where he now holds the lead by 30 points over Dance.

In the premier class small details marked the trial and decided the final results of the race. Lorenzo Gandola combined stunning moments with some mistakes, which finally dropped him to 10th place. David Avendaño couldn’t replicate his excellent performance from last week and had to settle with 8th in Junior, this place was taken by another green rider, Vertigo Italia’s Michele Andreoli after a great race. Leire Rodríguez got 11th place in Women International. Marco Andreoli rounded out the Top 5 in Over 40.

After back-to-back races the European Championship takes a 4-months break, as competition won’t resume until August the 11th in France.

Since the season started Pau Martínez carries an incredible straight of victories. It is two in a row in the Spanish Championship in the competitive Junior class, and this weekend he added a third one in his European debut aboard the Vertical R 125c.c in Youth. Despite the race developing in dry conditions, the Italian sections didn’t offer that much grip, leaving no room for errors specially when on the throttle to attempt the big steps. After a learning lap 1 Martínez decided it was time to open the gap with the other riders at the beginning of the second one, starting to push harder and widening the difference at the top of the standings to secure a solid victory, scoring almost half points than the rider behind him. A brilliant start of the season.

Another Vertigo rider shining in Pietramurata was David Avendaño, who claimed an amazing 3rd place in Junior. He held an intense battle for the spot with Gil Vila, both matching punctuations by the end of the race. The difference of cleans brought the particular win for the spot to Avendaño and with it, a great result for the Venezuelan in his first appearance in the European Series at the helm of the Vertical.

Busy weekend for the Vertigo Team with the Santigosa 3 Days Trial and the opening round of the European Championship both taking part the same dates. In Santigosa riders enjoyed a successful and crowded 48th edition of the iconic event, with nearly 50 Vertigo riders defending brand’s colours throughout the weekend alongside Jorge Casales, Dougie Lampkin and Berta Abellán.

Santigosa didn’t disappoint and offered one more time a nice battle for the victory. From Day 1, several names appeared as victory contenders after a clean and nice ride through the first 31 sections. Amongst them were Vertigo’s Factory riders Jorge Casales and the King of the SSDT, ambassador and developer for the brand Dougie Lampkin, both riding the brand new Vertical R. Just in a few days Casales will be Racing the last race of the X-Trial World Championship in Andorra, before he focuses on the outdoors as the beginning of the series is quickly approaching. Lampkin, as usual, planned the event as a perfect training towards this year’s SSDT, which are only a few weeks time, as Santigosa’s sections feature many of the elements the 12 Time World Champion will have to fight against in the Scottish Highlands where he holds 4 straight victories with Vertigo. Both remained faultless during day 1.

On day 2, they delivered again a solid ride and ended up with 2 and 3 marks respectively, what made them top the general standings at the halfway point of the race with the 1st and 2nd spots. Overnight rain left slippery conditions for the final day of racing in Santigosa, making grip hardly to find. The race was decided at the last sections, the most difficult ones and where the victory contenders left their last marks of the trial. At the end there was a three-way tie between Gelabert, Lampkin and Casales at the top of the standings with 6 marks. Official results left riders in this order after taking into consideration the number of cleans throughout the trial. Casales would eventually finish in 2nd place in the Senior class, same result for Dougie Lampkin in the overall but a great victory for him in Veteran A. He wasn’t the only Vertigo rider to make it to the top step, Berta Abellán had a phenomenal ride aboard her Vertical to came victorious in the Women’s class and placing in an outstanding 51th place overall.

Jordi Picola added another podium for Vertigo as he joined Lampkin in Veteran A’s podium after finishing 3rd, two spots ahead of Dani Comas. Carlos Casas rounded out the Top 5 in Veteran B. Yet another great result delivered for Elliot Laws, came 2nd in Youth.

The Italian Championship kicked off this weekend at San Gemini. Lorenzo Gandola had a great debut in the premier class with an impressive Top5, while Marco Andreoli made it to the top of the podium in the TR3 Open class.

It was a day of debuts for Lorenzo Gandola, as the Italian rising star made his first official outing aboard the brand new Vertical R. This was also his first race with the big boys, but he wasn’t intimidated by the more experienced riders nor the impressive level of the sections. He was fighting all day long for the top spots, keeping his cool and using his prime technique to build his way up to the Top5 by the end of the race. A great result that means an important boost of confidence and motivation for him.

Marco Andreoli brought Vertigo his first victory of the season in the Italian Series. He put in a dominant ride and no one was able challenge him for the victory in the TR3 Open class. There was yet another podium for the team, as young prospect Gabriele De Agostinis finished third in the Junior class after a brilliant performance.

In the TR2 class Michele Andreoli finished in a positive 8th place,  same position taken by Angelo Piu in TR3 Open. Edoardo Prtigliatti was 5th in TR3 while Gierri Nobili 9th in TR4.