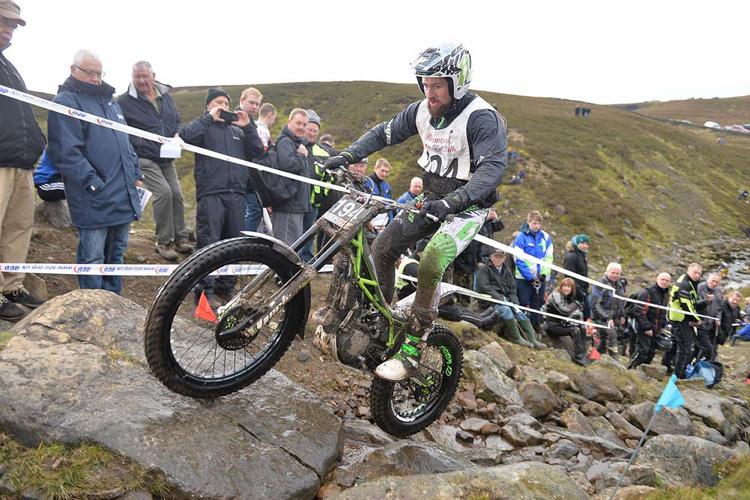 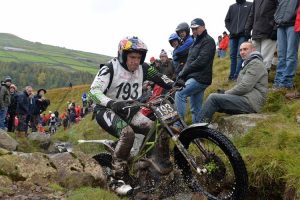 Having already won the famous Scottish Six Days Trial (SSDT) earlier in the year, Vertigo factory rider Dougie Lampkin came close to completing an historic double as he narrowly missed out on also capturing the equally revered and famous Scott time and observation trial. Over one hundred years after the event was first run, the Scott remains regarded as the toughest single day trial in the calendar and is a competition Lampkin has won four times previously.

After seventy six sections and around eighty miles over the tough north Yorkshire moors, Dougie ended the day in third spot on board his prototype Vertigo Combat, and just seven marks away from capturing the main trophy on a fifth occasion. This would have taken him clear of his father Martin’s record of four wins that he currently shares with his eldest son.

Using the rider-friendly two stroke fuel-injected machine to full effect Lampkin was by far the best on observation dropping a mere twenty five marks over the nearly eighty rocky and slippery hazards that were made even more testing due to the lack of water in the local rivers over recent months. Dougie ended the day some fourteen marks clear of eventual winner Ian Austermuhle in terms of marks lost in the sections, but was demoted to third place overall as time penalties played their equal part in the final result.

Dougie appeared to be in control of the event until later in the trial before he struck trouble just after exiting the famous Bridge End sections. Here the ex multi FIM Trial World Champion was forced to effect costly repairs as the battery failed on his prototype Combat machine. The time that Dougie spent changing this pre-production component was to prove the difference between him winning, and him eventually being forced to occupy the final rostrum placing.

It was not to prove the best of days either for Lampkin’s fellow factory rider James Dabill who also experienced some technical issues that were again to offset his observation performance as he too incurred hefty time penalties that would see him finish outside of the top ten come the finish.

Speaking at the end of the event Lampkin said. “Obviously I am absolutely gutted to have just missed out on being able to record what would have been an historic and incredible double for Vertigo in what has been an amazing first season for the new brand and team.”

“We decided that the Scott would be the last trial for the prototype bikes that James and I have been riding this year, as it is an event that totally destroys a bike. We did consider riding our new production- based bikes, but decided that we wanted to save these ready for next season with this being the last big competition for the team this year.”

Images by kind permission of Trialscentral.com 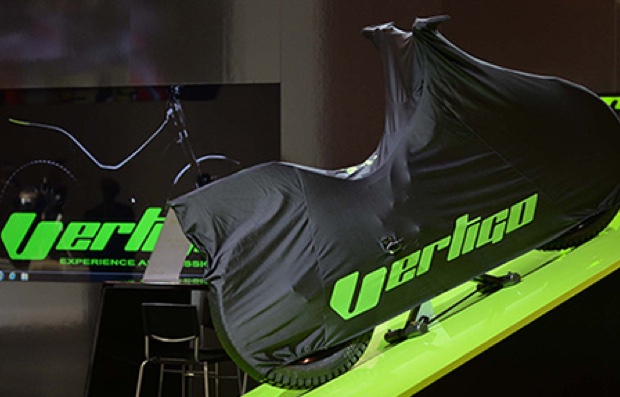 Vertigo Motors will return to the famous EICMA motorcycle exhibition in Milan, Italy to be held 19th to 22nd November 2015, almost exactly a year after the brand first broke cover with its Combat Trial model. Here it will celebrate an amazing initial twelve month period for the new Spanish manufacturer.

Although still in its infancy Vertigo has already achieved some amazing sporting successes with their brand ambassador Dougie Lampkin winning the much-revered Scottish Six Days Trial aboard the prototype Combat back in May. This was ahead of his compatriot and factory rider James Dabill gave the brand its first ever-national title as he clinched the British Trials Championship later in the season. Fellow factory rider Francesc Moret almost completed an incredible hat-trick of triumphs as he narrowly missed out on clinching the European Championship in a year when the Combat has more than proved itself whilst competing at the highest level.

Vertigo Motors will use the occasion of this year’s EICMA to display the 2016 Combat production model that was recently launched to selected distributors and media, but is yet to be viewed by the wider audience. In addition to revealing the updated Combat model, the exhibition in Milan will also give the Spanish company the opportunity to unveil a selection of other new and exciting models.

These will be presented to the media at 12.00hrs on 17th November 2015 during Vertigo Motor’s official press call.

ECIMA takes place at Fiera Milano, SS. 33 del Sempione 28, 20017 Rho, Milan. Press and trade visitors are welcome from Tuesday 17th November with prior accreditation. The exhibition is then open to the public from Thursday 19th November to Sunday 22nd November inclusive.

The recent official launch of the Vertigo Combat production model proved to be a huge success, with distributors and media from around the World being able to experience the incredible performance of this revolutionary machine first hand.

Filmed in the amazing Noassar training area at Camprodon, Spain and showcasing the splendid facilities associated with the Hotel Puig Franco, the resulting video provides a great flavour of this special occasion that was reinforced by the presence of factory riders Dougie Lampkin, James Dabill and Francesc Moret who were accompanied by an equally star studded supporting cast.

After many months of development, testing, refinement and success at the highest level of competition the moment has recently come for the Vertigo Combat production model to be unveiled to the World less than a year after the prototype version was first revealed in Milan late last year. The beautiful setting of the Hotel Puig Franco – puigfranco.es – Camprodon, Spain that sits within the grounds of the amazing Noassar training area was chosen as the location to share this important occasion as distributors and media were invited to the official launch that took place over two days, which included packed programmes for the interested visitors.

The guests were treated to a gourmet dinner on arrival and the chance to enjoy a night in one of the carefully selected ‘Trial World Champion named bedrooms’ at the Hotel Puig Franco before the real activities got underway.

On each of the two days, the guests comprising of a mixed party of both distributors and media were split into their relevant groups so that they could enjoy and experience the two distinctive parts of the carefully planned schedule. Whilst one group headed to the surrounding mountains to get their first ride on the Vertigo Combat in several different types of sections that included a good variety of terrain, the other group were treated to a technical master class delivered by Vertigo Engineer Manager Francesc Romani.

Feedback from both distributors and media from all the major international specialist publications and websites from as far afield as Mexico and Australia, after testing the Vertigo Combat production model was extremely positive. From the remarks and comments offered, the easy riding nature of the bike and the exceptional quality / attention to detail were the most often repeated words.

Whilst the actual riding experience exceeded expectations, equally the opportunity to see the compact, two stroke fuel injection engine dismantled and explained in detail in front of their very eyes in such close proximity also brought high praise from the extremely knowledgeable assembled audience as each and every part was presented for close inspection.

With brand ambassador Dougie Lampkin, factory riders James Dabill and Francesc Moret plus other members of the Vertigo team on hand to assist, the guests were able to fully enjoy the passion and experience that remains at the heart of the Vertigo family that is now growing at pace.

Speaking about the huge success of the event Vertigo Motors Sales Manager – Xavi Vilalta explained. “It has been amazing to have the opportunity to bring our valued distributors and the associated media from the various countries to Camprodon not only for them to enjoy and learn more about the Vertigo Combat production model, but to also experience the Hotel Puig Franco and Noassar training area.

“Whilst the quality and performance of the Combat speaks for itself, we are confident that our official launch event has also confirmed much more about Vertigo as a premium brand and how we intend to bring this to market.”

“With the initial test bikes now being delivered to the various distributors, and the first production models to follow shortly and over the coming months, we at Vertigo Motors are all very excited about this next and important chapter of the company and are sure that the Vertigo Combat will be well received and enjoyed by every customer that choses to join our special family.”

Hi-res rights free images for editorial use only available on request.